Since its establishment 20 years ago, the food company Fria Bröd AB has taken its gluten-free bread from the little industrial area in Västra Frölunda to 15 countries in Europe. Jeanine Öhrstedt Holmgren was recruited as CEO almost five years ago to help the company obtain greater market share in the gluten-free market. 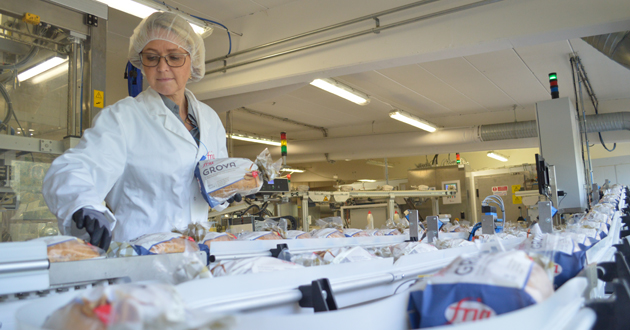 The clock has barely hit seven in the morning when verksamt.se’s reporter Anders Nyberg visits Jeanine at the Gothenburg factory to hear more about the company’s export journey.

You sell bread in 15 countries, actually 16 if you include Sweden – that’s been a pretty amazing journey
Yea, isn’t that amazing. A lot has happened since the founders Lena and Gunnar Adås 20 years ago saw the need to give gluten intolerants the opportunity to eat good bread.

What was the first country outside Sweden that you started selling in?
The first country was our neighbour Finland, then Norway and Denmark came along quite quickly. After that, everything has been running smoothly. We not only sell to stores and wholesalers in Europe, we also cooperate with celiac associations in Europe, i.e. the association for gluten intolerance.

What do you think a company looking for a new market should consider?
Go to the countries, walk around and look at the stores, visit potential customers, especially when it comes to food. In this way, you will get to know the country, the culture and the customers better. I usually also say it’s can be of great use to Google and gather information.

Also, contact Business Sweden, they can be a great sounding board and have offices across Europe. It has been worthwhile for us to consult with them. Then there are verksamt.se and a number of other government agencies where you can get a lot of assistance. Dare to ask. When you go out as an entrepreneur, it’s easy to start selling to those who want to purchase. But I think you should be careful about which customers and partners you choose.

Don’t sell to everyone who wants to buy?
No. Make some kind of background investigation. Make a risk analysis: review the company, check the creditworthiness of the company in a commercial credit reporting agency’s database. Ask questions such as: What does the company stand for, what is its history, how financially stable is the company, does its ability to pay look good? Take such an example as the payment terms, i.e. the time you have to wait to get paid. Your suppliers give you perhaps 30 or 45 days to pay; what happens if the company you sell to doesn’t pay until 60 or 90 days, or even sometimes 120 days? Include this in your calculations.

That sounds hard and risky?
Not really. But it’s not always the easiest thing. It is really difficult to know which customers and collaborative partners are right. But it is also the fun of a running company – being challenged all the time. We ourselves encountered the situation where a collaborative partner contacted us and wanted to sell our products. Everything looked great with them. They showed good sales figures and were already selling products from other Swedish companies. We tried things out with them for half a year, but in the end, they ended up not selling anything. We didn’t actually incur any financial costs, but we had counted on seeing an inward cash flow. Nothing ever came of it.

So what should you focus on?
Think twice, and start within the EU. It is easier because it is the same regulatory framework throughout the EU. For us in particular, someone who works with gluten-free bread, it may be the case that the definition of gluten-free is not the same in all countries, however within the EU it is the same regulatory framework. Actually, in fact both the United States and Canada have finally applied the EU’s gluten-free rules and regulation, so now a market is starting to open for us in the US too.

Thank you, Jeanine. Should we eat some gluten-free lussekatter now?
Yes, let’s! I love saffron buns. Thank you for coming by and chatting with us.